News of Those Once Affiliated with the Global Church of God

Since the November 1998 takeover of the old GCG by the board in the U.S., those once with GCG went to many places. Most of the members and ministers ultimately went with the Living Church of God (LCG), 8-15% went with the Church of God, a Christian Fellowship (CGCF) and smaller percentages ended up with David Pack's Restored Church of God (RCG), Harold Smith's Church of God Fellowship, Northwest (CGFnw), the Continuing Church of God (CCOG), and other groups (at least one which is outside the U.S. uses the term Global Church of God). On July 1, 2001, eight ministers resigned from CGCF and formed the Church of the Eternal God (CEG), similar in name, but not related, to the Eternal Church of God (ECG--founded by a minister removed from the original GCG ministry for impropriety). About a month later CGCF (USA) dissolved and most then with it ended up in the United Church of God (UCG). One former GCG minister (Ronald Laughland) became pastor of the Wholeworld Church of God. In 2004, Raymond McNair, having been in GCG, CGCF, LCG, then went on his own and formed Church of God, 21st Century (COG21); later he died and that group disbanded. Don Haney, once in GCG/LCG, formed the Church of God In Peace and Truth, renamed Congregation of God in Peach and Truth--which looks to be legally inactive. In 2005, Ben Faulkner, who was in GCG/LCG, formed the Church of the Sovereign God (CotSG). In 2006, Charles Bryce who was in GCG/LCG left, and formed the Enduring Church of God (En COG). In 2010, several of the main leaders who went to UCG from CGCF left it and went to a group called COGWA. A couple of people, like Norman Edwards (Servants' News/Shepherd's Voice), left GCG well before the 1998 takeover (he has 'Nashville Christian Media'). In 2013, Rod Reynolds left LCG and formed COG Messenger. On 12/15/11, a minister in good-standing with LCG anointed Bob Thiel with oil and prayed that God would grant him a double-portion of His Spirit (see also How To Determine If Someone is a True Prophet of God): and things have not been the same since (Bob Thiel still, of course, supports the goals and biblical beliefs of Philadelphia era of the Church of God). Website links for most of those who were once part of GCG and that have websites can be found at the COGlinks page. In 2012, certain heresies were officially introduced, accepted, and/or promoted by LCG. After concluding that insufficient value was placed on the truth (and keeing their word) by certain leaders of LCG and that they no longer held to biblical church governance and could not as is be used to lead the final phase of the work (see also Why Bob Thiel Left the Living Church of God), on 12/28/12 Bob Thiel was led to form, and then announced, the beginning of the Continuing Church of God (CCOG). In August 2020, Sheldon Monson left LCG and was 'marked' by LCG on 8/19/20 and then on 9/05/20 he announced Church of God Assembly (CGA). The Continuing Church of God (CCOG) is the second largest group, in terms of members, of those groups whose leaders were once part of GCG (LCG is largest). This page reports on those groups that somehow once had ties to the old GCG.

We are saddened to announce that Daryl Monson has been marked for cause. We pray he will repent and change soon so that he can be restored to fellowship and membership in the Church.

According to Scripture an individual must be “marked” for causing strife or division among members because not doing so will destroy the faith of others.

Romans 16:17 states: “Now I beseech you brethren, Mark them which cause divisions and offenses contrary to the doctrine which you have learned and avoid them.”

Those are all the details that were posted above, but will add that I have met both Sheldon and Daryl Monson in the past. In my view, Daryl Monson has long had governance issues, so this does not come as a surprise.

Greetings from Kenya.
I have received reports from all YOUTH Camps in Kenya that the youth camp in December 2021 went very well. I recieved a very good report from kisii that youth camp was fantastic.  But camp at Ndhiwa was wonderful. The youths were very happy and the way they handled the camp this year was quite different. We gave them one full day for their discussion amongst themselves. We noticed that the youths can have a high understanding and true discipline when they get together and teach one another. We saw some good response towards the youth camp. The youths were very happy and some of them wanted me to extend the camp for another week. I was with two deacons who came to teach the youths. Granton Otieno and Kennedy Odhiambo from Oyugis. They gave powerful massages to the youths. I touch a lot from the books of dating by Dr Bob. This book is a very good book for youths above 18 years old. It touches a lot that can help youths to understand about dating and courtship.
The youths from Mbani and Oriang didn’t not attend because of the burial of one of the youths who was in university.
This time we had 122 youths who attended the camp at Ndhiwa. Ezekiel Oanda also reported that they had many youths in Kisii. I also received a report from {Pastor} Sawek that the youths were so many in Chilani from Kaplecho, Daktech,  motosiet and Chilani. Some came from junction congregation where we supplied cement.
I also recieved a report from Njoro that there was a funeral.  A woman who have been in the CHURCH OF GOD for more than 30 years died a day to the opening date of YOUTH CAMP. So they postponed their youth camp till next week. The report was given by David Cheryot. So they will have camp by next week after burial.
What have noticed that the youth camp is very important and it’s really helping youths for their future life.
Here are some photos from Ndhiwa
Evans. 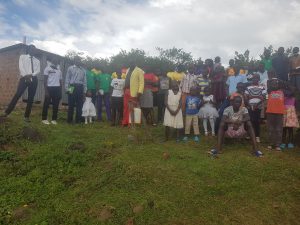 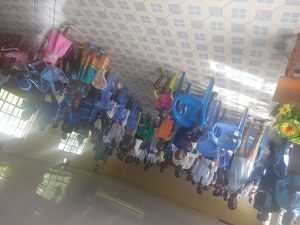 Here is a photo of the youth camp in Kisii which is cent to me by pastor Ezekiel Oanda.
I didn’t report that Bradox took some videos at Ndhiwa youth camp which he is planning to send to YouTube.
Evans. 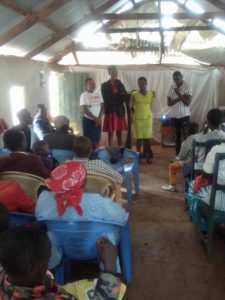 It is great that the camps held went well, despite certain deaths.

Pastor Tiongik Sawek sent the following about the camp in his area:

Receive greetings in Jesus Name. The youth camp at Chilani went well. Bomet  and Mau  youth camp went on successfully. The Brethrens were blessed. We taught all the youths to avoid unnecessary plans that are not Godly. We had representatives from Kabolecho and Takitech. We had teachers who taught the youths, the elderly women also contributed in teaching girls to abstain from earthly ways. We taught as seen in Proverbs 22:2.  We taught them through the book of 2Timothy 3:1-7. We further encouraged them to respect the parents and the entire church. They learned a lot about the good ways in the Church and respect for their parents. This will enable them also to show their good behavior wherever they are. (Mathew 5:13,14). We pray that God may succeed the  promise by Evangelist Ochieng concerning constructions of  houses that will be used during church meetings. Attached is the picture taken on that day.